The header image on this page is one of Frederick’s favorite pictures.  It was composed at Bryce Canyon National Park in late October.  The early morning light with the snow on the ground created a perfect palette for both Frederick Geiger in this shot and the photographer in this photo taking his image.

The precise composition of this photograph is representative of the work that Frederick has done his entire life.  He can get clear on what he wants to do, visualize it and implement it.  He has done it with retail store systems, software packages, Internet technology creation, his photography, and the creation of his own company.  He has now decided to dedicate the last portion of his working career to help small businesses make big impacts in the world. 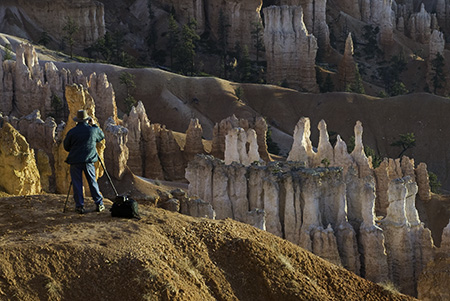 Frederick Geiger is a certified Duct Tape Marketing Consultant.  He learned marketing the by doing it in the real world in his business career as a software product manager and vice president of product marketing for a business to business technology offering at the turn this century.  His background as a technology manager that used a blend of internal and outsourced resources and agile development techniques has informed his business model.  He also is a certified professional coach with four years of experience coaching small business owners.

His coach training includes his completion of the program at iPEC - International Program for excellence in Coaching and the health coaching training from IIN - Institute of Integrative Nutrition.

While he enjoyed coaching others, he found that his biggest asset of being a person people trust to help them make decisions turned out to be a detriment when the role of a coach is to ask questions and not provide answers.

What he has found through his coaching practice is that the biggest issue these entrepreneurs have is how to grow their business.  This issue starts with a fear of marketing and sales. The lack of return from the initiatives that they have tried intensifies the fear.  Most importantly to Frederick, they were looking for direction, not questions.

As a result, Frederick bought into the Duct Tape Marketing system and spent from July 2016 through September 2017 immersing himself in the real world lab of working with five beta test clients for his marketing efforts on their behalf. He now feels comfortable taking these products to market.

As a real-world software product manager who lived depended on the outcome of marketing efforts and a technologist by nature, Frederick believes that all marketing efforts should be measurable and produce a return. His efforts in product management and development included the receipt of a US patent for the intelligent processing of messages over the Internet.  This processing included checking email for virus and other dangerous attachments as well as the intelligent routing of messages.

In the nineties, Frederick was instrumental in the creation of the plan of re-organization at Phar-Mor, where he coordinated the reorganization efforts of his IT department and the outside professionals responsible for the restructuring to implement category management. The first step in the development of the plan was to determine who the firm was really in competition with. It became apparent that the company could not compete effectively with Walmart, who had a supply chain advantage that got products to stores for less money then Phar-Mor could. As a result, the competition for the firm had to be changed, and the pricing model and brand positioning had to change significantly.  The company had to become more regional and focused on traditional drug chains as a result.

The process at Phar-Mor used facts and data analytics to change the product mix and increase gross profit by two full percentage points. The company was repositioned to be a full-service discount drug chain.  It was able to emerge from bankruptcy successfully.  But years of poor management after Frederick left the firm finally killed it eight years later.  Nevertheless, the processes used to create category management and the marketing changes gave the company a chance to do well, and for a few years, they did.

He now applies this ability to understand data analytics to help his clients understand their return on their marketing investment.

In addition to his work as a technology executive, Frederick had to focus on real-world practical product management in the software industry, and he was instrumental in creating a global data synchronization network working with senior executives in the Food,  Drug, Fast Moving Consumer Goods and Apparel sectors of retail.  He learned that being early is not always an advantage for software and technology companies. It is more important to bring products to market at the right time.  This speed is particularly the case for small businesses.

In the creation of the Marketing offerings for onCOREventures, Frederick is using his technology process management background.  He is combining it with close to five years of working with business owners, both as a business coach and an Area director for BNI of western Pennsylvania.  The result is a methodology that is predictable and measurable.

This website uses cookies to improve your experience while you navigate through the website. Out of these, the cookies that are categorized as necessary are stored on your browser as they are essential for the working of basic functionalities of the website. We also use third-party cookies that help us analyze and understand how you use this website. These cookies will be stored in your browser only with your consent. You also have the option to opt-out of these cookies. But opting out of some of these cookies may affect your browsing experience.
Necessary Always Enabled
Necessary cookies are absolutely essential for the website to function properly. This category only includes cookies that ensures basic functionalities and security features of the website. These cookies do not store any personal information.
Non-necessary
Any cookies that may not be particularly necessary for the website to function and is used specifically to collect user personal data via analytics, ads, other embedded contents are termed as non-necessary cookies. It is mandatory to procure user consent prior to running these cookies on your website.
SAVE & ACCEPT